Environmental watering over the last five years has initiated migration of the threatened Australian grayling to spawn in the lower Thomson River. One fish was recorded travelling up to 140 km.

Australian grayling are prompted by increased river flows and possibly lower water temperature to migrate downstream to spawning sites in the lower reaches of the Thomson River in late April to early May.1 Following spawning, eggs and larvae drift downstream to the sea and young fish travel back into freshwater river habitat 4–6 months later.2 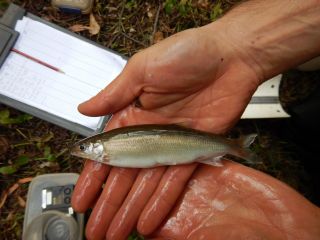 Acoustic telemetry (an important scientific method where transmitters are implanted into fish and receivers are placed intermittently along the river) was used to track the movement of adult Australian grayling in the Thomson River in response to environmental watering that increased the flow rate and height of the river for several days in 2012 and 2013.3 No eggs were captured that year, indicating that 600 ML a day is too low for successful spawning. This demonstrates the need to provide river flows of sufficient magnitude and duration to allow adult fish to reach spawning areas. It is also important to maintain river flows and connectivity so they can return to their home range.

At times when the flows are not quite right and fish are presumed to stop migrating to the spawning area, multiple water releases may be provided to get the fish moving again, if environmental water is available. Alternatively, suitable natural flows could prompt fish to move again.

The recovery potential of Australian grayling is determined by multiple factors including marine larval stocks, river flows, food and habitat availability; and these interactions are complex.5 In the last five years, fish ecologists have improved sampling and learned how water volumes affect Australian grayling spawning in the Thomson River 6. This knowledge is being applied to environmental water management. In time, knowledge will increase further and environmental water secured for the Thomson River will be used more effectively to give Australian grayling a brighter future.

2 D. Crook, J. Macdonald, J. O'Connor and B. Barry, 2006, Use of otolith chemistry to examine patterns of diadromy in the threatened Australian grayling Prototroctes maraena. Journal of Fish Biology, 69: 1330-1344.