The annual spring delivery of environmental water was released slightly earlier than the previous year's October flow to improve the chances of seed germination and plant growth on the river banks before the forecast hot weather arrived.

"After losing a lot of bank vegetation during the 2010–11 floods, rushes, herbs and grasses tolerant of fluctuating water levels have re-established on the river banks," Goulburn Broken Catchment Management Authority's Meegan Judd said. "Flow variation is important to provide soil moisture to the bank and build the populations of these plants along river banks. Flows also provided a moisture store in the river bank to maintain these plants going into what was forecast to be a hot, dry summer." 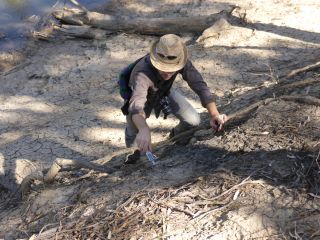 A second release of environmental water was considered for November to provide cues for golden perch breeding and migration, but it didn't go ahead due to low water allocations.

"Fortunately, the previous two years had seen good golden perch breeding in the Goulburn River and consequently the November release of environmental water was not one of the highest priorities for 2015–16."

The Goulburn River is popular for recreational activities, particularly fishing, which benefits the regional economy.

During environmental water releases in 2015-16 the higher river levels were good news for anyone heading to the river to boat, fish or swim during Easter and the school holiday period. They also provided additional downstream environmental benefits.